From digestion to immunity, why yeasts improve pet health

You thought you knew everything about yeasts? You might be wrong.

Yes, it is now well known that yeast-based ingredients can improve pet digestive health when used preventively in pet diets.

But recent discoveries on the role of the gut in body functions not only confirm the power of yeasts to improve digestion, they also explain their numerous other health benefits.

By protecting the gut, yeast-based ingredients can also reinforce pet immunity and support the body’s natural defenses. They constitute a good option to help pets resist environmental challenges and prevent many health disorders.

What are the gut’s secret functions?

What happens to pets when the gut goes wrong?

What are the health benefits of different yeast ingredients?

How to choose the one?

Discover the beauty of the yeasts…

What is the Gut?

If you want to understand how yeasts can improve a pet’s overall health, you need to get acquainted with the gut.

While it’s not the most glamorous organ of the body, the gut is undoubtedly one of the most important. It is the keystone of digestive health and, if we trust what has recently been demonstrated in humans, its role goes far beyond digestion.

With a length of around 2 m for a cat and 5 m for a dog, the gut is the longest part of the alimentary canal. Its interior is lined by mucosa, a membrane that constitutes a wall between the external world and the interior of the body. 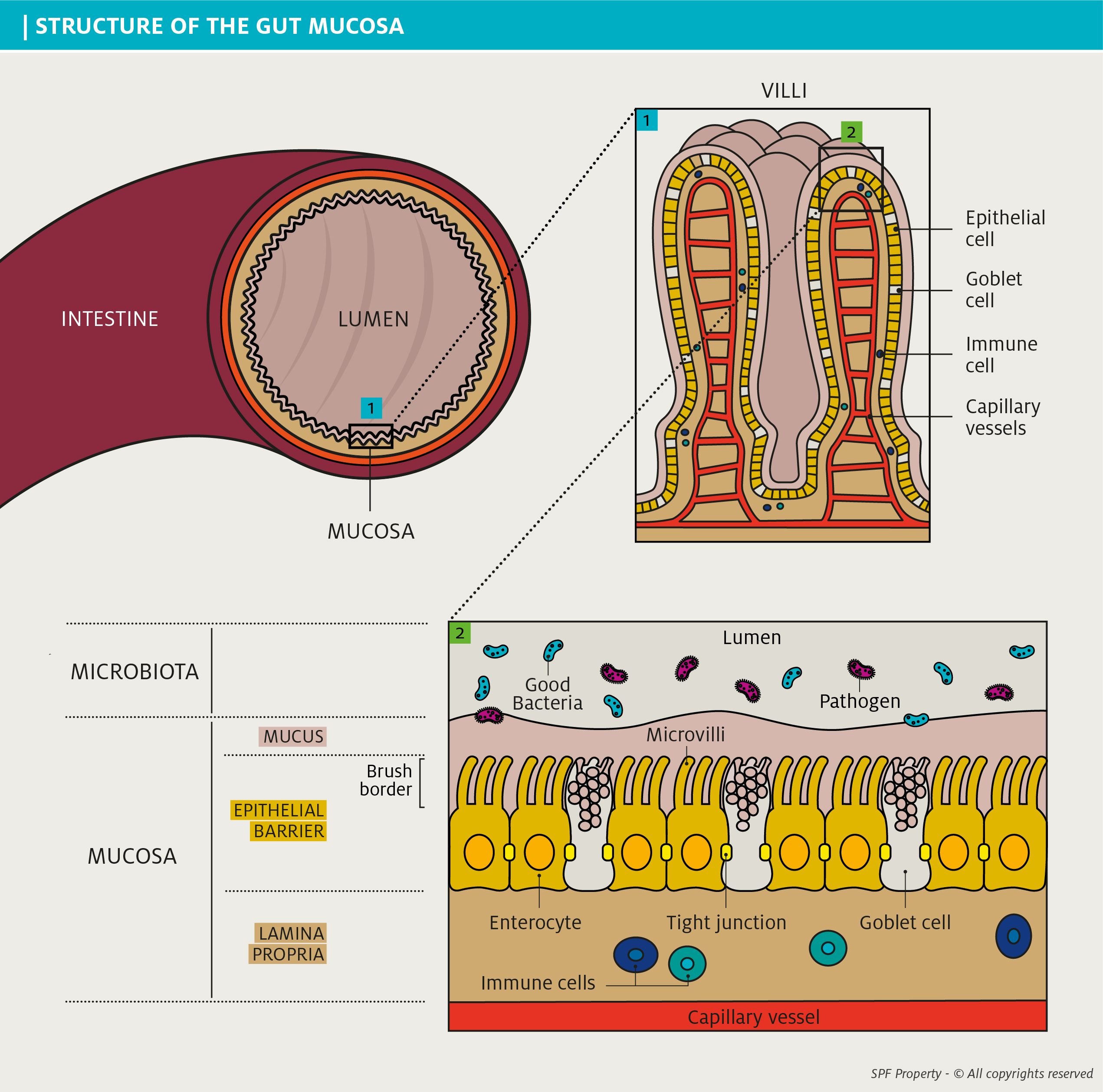 The intestinal mucosa is made of 3 layers:

1 – The superficial layer consists of mucus.

2 – The inner layer – the epithelial barrier – is mainly made of enterocytes, the cells responsible for digestion.

These cells comprise folds called microvilli, which offer a high exchange surface particularly adapted to nutrients and water absorption. These microvilli constitute what is called the brush border.
The epithelial barrier also contains the goblet cells that produce the mucus, as well as other types of cells secreting antimicrobial peptides and various hormones.
These epithelial cells are closely linked by tight junctions, constituting a physical barrier against microorganisms and their toxins.

On top of the mucosa, the gut hosts a treasured “guest”: the microbiota.

Formerly called gut flora, gut microbiota is the microbial population found in the intestine at the interface between the mucus and the inside of the gut.

Counting up to 100 trillion micro-organisms, the microbiota of cats and dogs lives in synergy with gut cells and plays a key role in various bodies’ function including digestion and immunity.

Gut functions: from digestion to emotion

The primary and main function of the gut is digestion. The enterocytes absorb the nutrients brought by food that are then used for energy supply and body syntheses. The microbiota also participates in the digestive function by helping the body to digest certain foods or to produce some vitamins.

The gut also has a key physical barrier function. The brush border, the mucus, the tight junctions, and the microbiota form a wall that prevents pathogens such as bacteria from entering the body.

70% of the immune system is located in the gut, which has 2 primary roles related to immunity:

Finally, the gut is increasingly considered to have a key role in well-being.Recent findings have demonstrated a link between microbiota, gut, and brain in regulation of emotional responses and pain.
They also highlight the connection between intestine and brain for satiety control.

When the gut goes wrong, nothing goes right

Some pet gut troubles are easy to identify for owners. Diarrhea, constipation, vomiting… all visibly express a dysfunction of the pet intestinal tract.

Alteration of the tight junctions or of the mucus can, for instance, increase intestinal permeability, allowing bacteria or food compounds to cross the barrier. These undesirable substances may cause local inflammation or enter into the bloodstream, triggering food poisoning, gastroenteritis or food allergies.

But other troubles such as itching, dull fur, reduced vitality, or mood change can all be more subtle manifestations of gut disorders.

Used in brewer, alcohol, or bakery industries, yeasts are simple cells constituting a nucleus with a cytoplasm protected by a wall.

Numerous yeast-based ingredients are used in pet food. But not all of them have the same properties.

Yeasts can be given live and whole as probiotics* but several yeast derivatives can also be used to improve gut health. 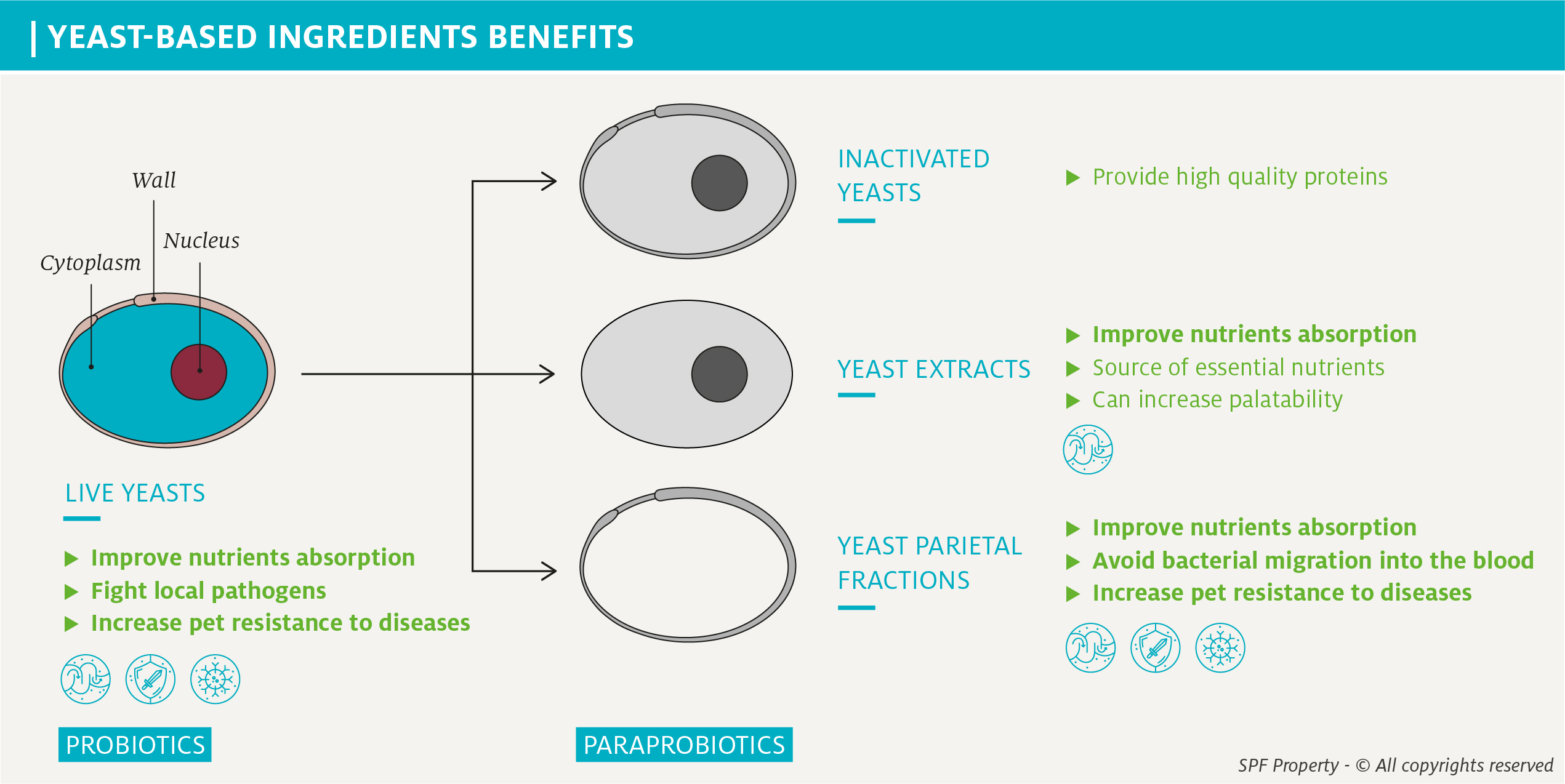 Live yeasts can reinforce the barrier function of the intestinal tract: when in the gut, live yeasts, deprived of oxygen, produce active substances, including antimicrobials, that help to rid the gut of local pathogens.

Inactivated yeasts are obtained via controlled heat treatment. They can be used for nutritional purposes as a source of high-quality proteins.

Yeast extracts are the inside part of the yeast cell. They are rich in small bioactive peptides, nucleotides, and vitamins. These compounds protect the brush border and improve nutrient absorption.

Yeast parietal fractions come from the wall of the yeast cells. They contain mannans and beta glucans, known to be physiologically active in many animal species.

– Mannans can augment the height of the villi, thus increasing the gut exchange surface and leading to better absorption of nutrients

– Mannans bind pathogens and toxins entering into the body via food, avoiding for instance food poisoning caused by bacteria.

– They can also reinforce tight junctions and stimulate mucus production by goblet cells. This creates a natural shield protecting the brush border and avoiding bacterial migration into the blood.

*Probiotics: Probiotics are live micro-organisms which, when administered in adequate amounts, confer health benefits to the host.
(FAO/WHO 2001).

Now you know: the different types of yeast-based ingredients have different modes of action on the gut, thus bringing a variety of benefits to the pet.

Depending on the functionality you want to bring to your food, you can select a specific one or even combine them in a holistic approach.

And here begins the big dilemma. There is indeed a plethora of yeast-based ingredients with huge variations in quality and efficacy.

The best approach is to choose a steady solution with benefits that have been scientifically proven in cats and dogs, and stick to it.

Only this can guarantee performance and differentiate your product by promoting functionalities supported by real, substantiated claims.

Contact the expert
Comments (1)
A concise review with a good balance of accessible information. Thank you!
Louise / 15.05.20

Stay tuned for our latest articles and news

Discover what dog parents are ready to do to improve the health of their aging dogs.

Cat food: How to make the most palatable kibbles

Discover the golden rules to formulate a dry food that cats will love.